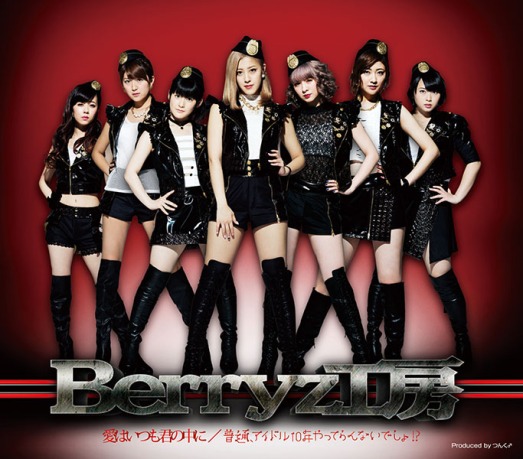 Hello hello everybody! Since both MV’s for Berryz Koubou’s 35th single and latest double-a single were uploaded on their official youtube channel, I’m going to take the time to share some of my thoughts of these two new songs. I feel like it’s been a long time since I did any Hello! Project MV reviews but I’m just go with the flow of things, and hopefully I remember how I format this things and l hope my writing skills aren’t that rusty. Let’s go!

There’s a few parts in the instrumental that reminds me of an older song that usually plays on the radio, I can’t exactly put on my finger on what it is. Whatever songs I think of, it turns out that it isn’t what the instrumental reminds me of. I thought it sounded a little like “I Wear My Sunglasses At Night” by Corey Hart but it could wrong (maybe dead wrong). This instrumental sounds so familiar to me, but I can’t figure out which older radio song that this song reminds me of. It’s going to probably bother me until the day I hear that one song on the radio. I might be right though with my little guess, but who knows!

The MV: The MV has the girls wearing black uniforms dancing on a red carpet in front different lights to cast their shadows in the background, almost exactly like in Juice=Juice’s memorial edit MV of Watashi ga Iu Mae ni Dakishimenakya ne. The close up’s consist of the girls standing around looking gorgeous with their member colors in the background. It’s a pretty simple and typical MV for Hello! Project. But you know, the girls rock this set so hard that it’s practically perfect.

You guys may know that Captain is my favourite Berryz Koubou, but I couldn’t take my eyes off of Momoko. She looks amazingly great and so serious in this MV. I like having a serious Momoko, rather than having Momochi (if you know what I mean). Deep down I really like and admire Momoko, but Momochi can be a bit too much sometimes. Momoko is a hard worker and she knows what she’s doing. I got nothing but respect for that girl.

Now speaking for the other girls, they also all looked gorgeous in this MV. There was good hairstyles and good fitting outfits. There’s nothing more I can ask for. Having all the girls looking good for a new single is good enough for me (looking at you Otona na no yo & Motto Zutto Issho ni Itakatta! Your outfits weren’t any good for anybody).

The Dance: The dance is pretty alright. I’m not like a super fan of it but I don’t I hate it. I think it goes well with the powerful song it has to flow along with. It has a matching power and serious tone to the song. I find it’s more of a march and is more structured compared to other dances that Berryz Koubou has had in the past, but it works and it looks good.

The Song: Futsuu, Idol 10nen Yatteran nai Deshou is a song about being idol. The lyrics of this song describes some of the hardships of being an idol but having the strength to never give up on their journey of being idols for ten years. I find that this song is another perfect song for Berryz Koubou. I feel like that this song is sung straight from the heart by the girls, since the topic of this song is about something that they know and have experience with. Songs about boys and relationships is great but it’s something they don’t have much experience about since these girls aren’t allowed to date.

When I first heard the radio rip of this song, I really liked it and thought it was a pretty cute song. It made me laugh when I first heard the horse sounds, it really threw me off since it was so random and I didn’t expect hearing a horse in this song. The way the song’s instrumental and lyrics flow together, it sounds like a really fun song. But reading the lyrics while watching the MV, it made me a little sad since it’s about the reality that these girls had to face with becoming and being an idol. I know it’s supposed to be a happy song by saying being an idol is something that they love to do, but ouch, reading these lyrics stabbed me right in my little heart. 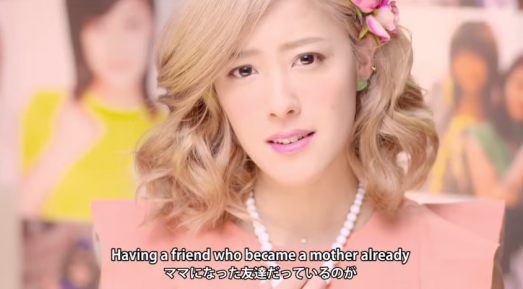 The MV: I think the MV is made really well. I really love the backdrops with pictures of each girl from various era’s and singles that Berryz Koubou had in the past, it’s a very nice touch and it’s quite nostalgic. I think the way this MV was shot is very appealing to the eyes. The girls have interesting but calm and nice outfits with nice hairstyles, it’s nice to have Berryz Koubou in good clothes for both singles. Having a nice and color appealing MV reminds me of the MV for Tomodachi wa Tomodachi Nanda.

The girls looked mega cute with their cute little outfits. I kinda find that Risako is wearing something that Martina (from eatyourkimchi) would wear, I could even see Martina having that hairstyle. It’s cute though, I’m not saying it’s bad or anything. Everybody looked great, and the MV is just spot on.

The Dance: The dance is interesting as well. In the very beginning they start off with fighting poses that aren’t flashy and the rest of the dance is pretty cute. I also like how they incorporated the girls pretending to ride horses to go along with the horse noises in the song. It’s an interesting dance.

Overall:  Overall, I think I would have to say Futsuu, Idol 10nen Yatteran nai Deshou is my favourite out of the two new singles. I would give this song a 8.8 / 10. It’s only up a little more compared to the Ai wa Itsumo Kimi no Naka ni, but both of these songs are really great and I just really love them both.

Both of these songs are just so excellent, you should give both songs a chance and listen to them and watch the MV’s. It seems to me that Berryz Koubou are getting the good songs this year, I know it’s still early to be saying this, but their last single was really good and this single follows up just as nicely and maybe just a little bit better than the last. I’ve already pre-ordered my copies but I think I might buy a few more (if there’s still first press available, I haven’t checked yet) since I’m just loving both these songs. Berryz Koubou definitely needs more love and support.