The MV’s for S/mileage’s 16th single “Mystery Night! / Eighteen Emotion” were uploaded to their official youtube channel recently. I’m pretty excited about this single, so I’m quite happy to be talking about both of the singles today.

The Song: The song of Mystery Night is a really different type of song for S/mileage. Even though that this song sounds like it could be a C-ute song instead, I’m glad S/mileage got a song that’s a bit different from their usual songs that they usually get since they did an amazing job with the lyrics and all of their vocals sound really nice in this song. The song itself has a really wonderful flow to it with a really nice beat.

It’s definitely a grown up song for S/mileage though and does has some suggestive lyrics, even though there is only one adult in this group. I do realize that this is song is pretty suggestive in a way, but I really do like this song. Sure we have some pretty sexy songs in Hello! Project (mostly from C-ute), but when have we ever seen a song like this one?

I personally think that this song is really great. There’s quite a bit of people who don’t like this song because of it’s lyrics, but I am not one of those people. Yeah, I was a little shocked with some of the lyrics as well, but the song itself is golden. I think it’s nice to finally hear a sexy song from S/mileage. It’s different and they did a really good job with it. The members of S/mileage are growing into really wonderful and beautiful women and it’s interesting to see a different side of them. S/mileage aren’t the babies of Hello! Project anymore.

The members of S/mileage are mature ladies who can sing about flirting and dancing with guys all night all they want, it’s not like it’s stuff they actually do. It’s just a song, and if you don’t like it there are plenty of other S/mileage songs you can listen to where it’s all fluffy and cute. I was a fan of S/mileage since a little after they released their first indie single and I think it’s nice when they get an image change once in a while. Like I said before, I think this song is golden and it’s probably one of my most favorite songs S/mileage released in a while besides Ii Yatsu.

The MV: The MV is just as mature and sexy as the song. It kind of looks like that they’re in some type of warehouse or something along that line with a huge fan in the background of the dance shots. Every shot or every girl is so amazing and they all look so great in this MV.

Even though Dawa is my all time favorite member, my eyes were glued on Kana and Akari the whole time while I was watching this MV. I usually find Akari has a certain charm that makes you notice her more in MVs, I find it shows a lot during this MV and in Dot Bikini. While with Kana, I thought she look absolutely beautiful and I couldn’t keep my eyes off of her whenever she was in focus. Not only did Kana look absolutely great, but her vocals in this song were superb, and I think her one little solo line in this song is probably my most favorite part within the song.

The girls are wearing corset dresses in this MV and they are quite a bit of shots centered at their chests. It’s like there’s cleavage all over the place in this MV. Now, even though I didn’t mind the whole sexiness of the song, I do think there was a bit too much cleavage in this video. You can do sexy without showing too much of the girls. The MV still would have been really good and well put together even without all the cleavage shots.

This song is definitely a huge image change for S/mileage. I really love the song and MV, and dance is okay, it’s a little too sexy but most of it is pretty good. I think I would probably have to give this single a 9 / 10. I personally think it’s one of the best singles in Hello! Project so far this year, and definitely a really great song for S/mileage.

The Song: I find Eighteen Emotion is the very opposite of Mystery Night. It’s definitely a usual type of song that S/mileage tends to get, and it reminds me a little bit of their earlier releases like Suki-chan or something like one of their b-sides (when Hello! Project use to get b-sides). It’s a really cute and cheerful song, and I could definitely see this song being sung a lot at their concerts that the crowd enjoys a lot like Suki-chan or Unchouten LOVE.

I do like this song, but I don’t really find the song as great as Mystery Night. And I don’t really have much to say about this song besides that it’s a pretty cute song and that the girls sound really great. I must say that in this song as well as Mystery Night, Kana sounds really nice and really sticks out the most. That girl improved so much over the years and I’m really glad that her and Rina aren’t stuck in the back as much as they use to be. 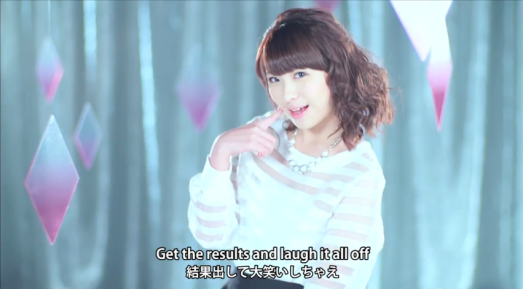 The MV: The set of the MV reminds me of the anime of K-on! To be honest with you, I never watched that anime but with the S/mileage members dancing in front of some speakers and amps, it kind of reminded me of K-on for some reason. And with the members laying around in a circle with the colorful wires around them kinda reminds me of Morning Musume’s 1st coupling album since they have strings around them. 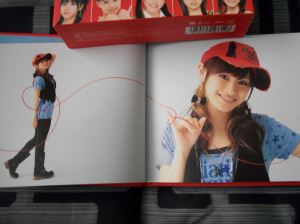 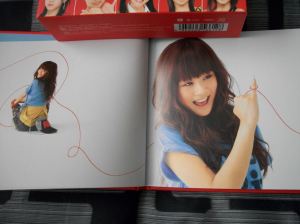 (photos are from SayuNii’s review of Morning Musume’s all single coupling collection. Links are attached to the pictures).

Besides the MV reminding me of everything else in the world, the MV is done pretty well and I liked and enjoyed watching it. I thought the contrast of it was pretty bright but I guess it’s the plain opposite of Mystery Night’s MV where it was all dark.

The Dance:  I really enjoy watching this dance. It’s cute, quirky and it’s just really fun to watch. I really love the parts when they say eighteen and they put their hand at their cheek while looking to the other side. I don’t think I described it well, but if you watch the dance I hope you get what I mean. Even though this song has a pretty cool dance that I like quite a bit, there’s just a couple of moves that I didn’t really get, like the little monster moves during the dance break. I don’t really get what that’s all about, but nevertheless, the dance is done pretty well.

Eighteen Emotion is pretty good song, and I would probably give it a 8.4 / 10. I think it’s a pretty typical S/mileage song, and I don’t really find anything super spectacular about this single.

It’s release date is April 30th.
If you like this new double-a side single from S/mileage, be sure to order/buy your copies to help and support them.